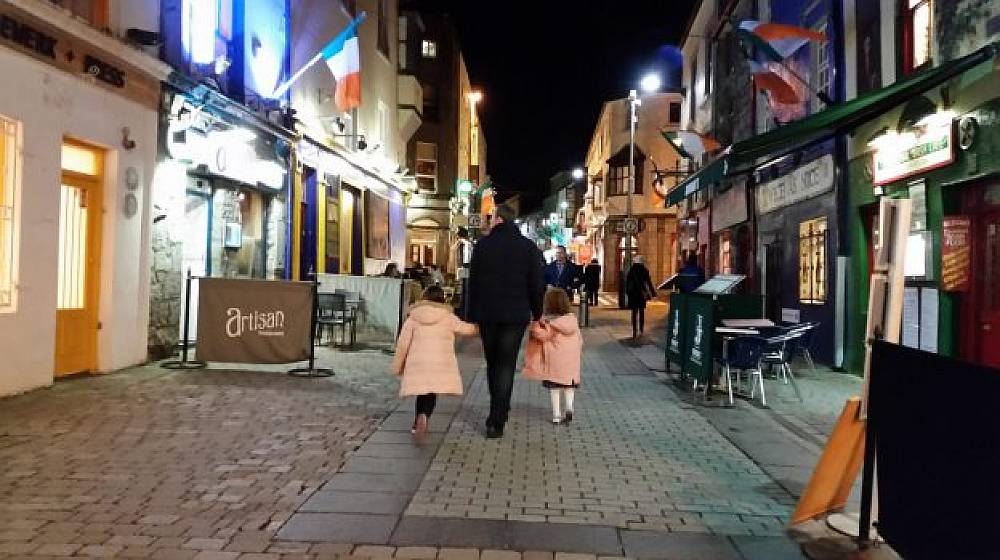 We stumbled upon this write up from Andrea Mara | Officemum.ie on her stay with us in The Connacht Hotel and even though it's been a while it's still very relevant if you are planning a short family trip to Galway.

Andrea Mara is a a freelance writer, blogger, newly published author, and mum of three.  Office Mum is about being a parent, about juggling work and home, and mostly about being a human today, muddling through!

Thanks again Andrea and we look forward to welcoming you back again soon.

PRESS: Into The West - Review of Connacht Hotel & What to do with One Day in Galway

Eight years ago, I went along to the Saturday Night Show in RTÉ, and came away with a one-for-everybody-in-the-audience night in a hotel. So we duly booked our night, and headed off to Clane with our then seven-month-old. We weren’t quite sure how staying in hotels with babies worked, but everyone else seemed to do it, so it must be fun we reasoned.

In the end, it came down to either putting her to sleep in her cot and sitting in the dark without saying a word, or taking her to the restaurant in her buggy and crossing everything that she’d sleep. Not seeing huge appeal in the sit-in-darkness option, we went for plan B and spent a nervous hour entertaining a wide awake baby while we inhaled a main course and tried to look like the relaxed holidaymakers we were pretending to be.

Since then, we’ve brought the kids to hotels exactly zero times. We’ve stuck to self-catering, so there’s somewhere to sit when the kids go to sleep. But when we were invited to check out The Connacht hotel in Galway– staying in interconnecting rooms, with a sitting room in between – it seemed like it might be time to introduce the kids to the world of hotels.

Of course, excitement was sky high when we told them the news, and possibly the best conversation I’ve ever, ever had with my kids was when they asked what hotels are like, and specifically, how breakfast works:
“Do we bring our own cereal down or buy it in a shop in Galway?” asked the six-year-old.
Oh wow, I thought. They don’t know about hotel breakfasts and I get to give them the good news.
“So, in hotels, you eat breakfast in a restaurant,” I started.
“Ooh!” they said,
“And the way it usually works, is there’s a buffet. Do you know what a buffet is?”
They shook their heads.
“So you go up and get a plate, and take anything you like – sausages, bacon, eggs, toast, cereal, juice, and pastries. You take as much as you want, you eat, and then, you go back up for more.”
“WHAT?! They have pastries? And you can take as many as you want?”
Cue much fainting and screaming. This was going to be fun.
***
After weeks of counting down, the day finally arrived – we picked the kids up from school and headed west. Friday morning’s snow had given way to rain in Dublin, but as we crossed the country, blue sky gradually replaced grey, and our first glimpses of Galway were lit by golden evening sunlight.

The Connacht Hotelis just a couple of kilometres outside the city centre and very easy to find. Check-in was quick, then came the fun bit – letting the kids in to see the room. The oohing and ah’ing could be heard all over the hotel – they had never seen the likes of it. “This is really living the dream, isn’t it mum,” said the eight-year-old, having just discovered that there were three TVs in total, one of which was in the kids’ bedroom. For my telly-loving kids, these were dizzy heights indeed.

Some of the critical packing the 6 year old did
The kids unpacked their clothes and books, spreading them throughout every single drawer and wardrobe in their room (packing up again would be great fun) then came through to examine the sitting room (couches, arm chairs, TV, desk, kitchen table) and the kitchenette (a dishwasher!  and a microwave, an oven, a fridge, and everything you’d need to do the trip on a self-catering basis). On they went to our room, to see how if it was as good as theirs – poor us, we had only one bed compared to their three (we’d asked for a camp bed to be put in theirs so that they could each have their own bed). Delighted with both bathrooms too (“hey – they’re the same!”) it was time to sign off on the inspection and start exploring the hotel.

We headed for the hotel restaurant for dinner – the kids said they were starving after the journey, which had been interspersed with only a dozen or so food breaks. So we settled down for a relaxing meal… with three hyper kids who’d never been in a hotel before. Within minutes, there were people under the table, people running around the table, and people arguing over the correct position for the flower vase. I suggested wine for us – my husband quickly agreed.

Critical wine
The four-year-old was entertaining himself by pouring juice into his water glass and vice versa. “Stop pouring!” I said. My husband, who was filling my glass of wine, looked up. “Not you,” I said, “You keep pouring.” It was going to be one of those meals. Except, it wasn’t. Because the restaurant was full of families, and the usual worries about noise and spills didn’t matter at all. The unequivocal joy of a child-friendly restaurant.

There was a kids’ club running, but we decided to head back and enjoy the room – the three kids got into one bed and settled down to watch TV. This was a huge deal – TV in bed – and they weren’t fussy about what they watched. At one point they had an  infomercial for an exercise machine on for twenty minutes. We were in the sitting room, watching our own TV, with a glass of wine. A far cry from the sitting in the dark scenario I had once imagined. Bliss.
It took a while to get the kids to go to sleep – partly because of the excitement, mostly because the four-year-old couldn’t get over that he was sharing a room with his sisters, and kept them awake to tell them about it over and over again. Eventually we put him in our room, and they all got to sleep within minutes.

Breakfast bliss
The biggest deal of all came the following morning – the long-awaited, much-anticipated trip to the breakfast buffet. Going up to get their own juices, cereal and pastries was a huge novelty, and the girls became our waitresses – “Are you sure you don’t want another juice? I’ll get it for you, it’s no trouble, go on”. The small boy was happy to sit and have food brought to him – win, win. After breakfast, we went for a swim in the hotel pool – the water was warm, and there were loads of smaller pools suitable for younger kids. All of it was very child-friendly, and they loved it – coaxing them out was the toughest part.

So now, what to do with one day in Galway? I had no idea, but luckily, my friend Naomi lives in Galway, and had given me an itinerary. If she ever stops being a Children’s Science consultant, she’d make a great virtual tour operator. So following her tips, this is what we did:
We parked in the city centre and walked to Spanish Arch – we had a good look around the museum, then went for lunch in The Kitchen, an absolutely gorgeous cafe within the building.

Lunch at the Kitchen
The kids wanted another look around the museum, especially the interactive maps showing medieval Galway, so it was 3 o’clock by the time we wandered back into warren of colourful city centre streets.

Charlie Byrne’s bookshop
We found Charlie Byrne’s Bookshop and spent time browsing through new and second-hand titles, before buying a book for everyone, then heading back out to stroll around the busy city centre.
We had promised the kids ice-cream, so we drove to Salthill and walked along the sea front (once the all important treats had been located – not as easy a task as we had anticipated, but we were saved by Supermacs).

Sundaes on Saturday
The four-year-old was tired and cross at this point after his late night, so we drove out along the coast, through Barna and on to Spiddal. The views were spectacular on the beautiful, sunny evening but even better, the four-year-old fell into a deep and much-needed sleep.
Dinner was next, so again following one of Naomi’s suggestions, we went for a pizza and pasta restaurant called Fat Freddie’s. It was exactly what we needed for three hungry kids full of ice-cream and salt air. It was dark when we left the restaurant, but the streets were full of life and light, and the kids were delighted to be on a  grown up “night out”.

Night out in Galway
Bedtime back at the hotel was much easier than the night before – tired after their day of swimming, sight-seeing and fresh air, they were all asleep by 9 o’clock. We adjourned to our sitting room with newly purchased books, a carrot cake we’d picked up in Salthill, and two large glasses of wine. All the bliss.

More breakfast bliss
The following morning, we managed to fit in some air hockey and playtime in the kids’ club between breakfast and checkout, but all too soon it was time to go.
What was your favourite bit?” I asked the six-year-old on the way home. “I know this is going to sound weird,” she said, “But I think it was the room.” And yes, magical though our day out was, I think that’s my answer too. Bliss.
*
For more details and bookings in this wonderfully child-friendly hotel, visit TheConnacht.ie
Our stay at the hotel was complimentary for the purposes of this review, but all opinions are my own!

Contact our Reservations Team today who can assist you in planning you Summer Family Break in Galway on 091 381200 or reservations@theconnacht.ie